Founded in 1999 by Jess Wood MBE and James Newton, Allsorts Youth Project has now been delivering LGBT+ youth services for over two decades.
‍
In the 20 years of Allsorts’ existence, a lot has changed for LGBT+ people in the UK. Section 28 was repealed in 2000, the age of consent was equalised in 2001, the Gender Recognition Act (2004) and Equalities Act (2010) were introduced, and the Marriage Act brought the UK closer to marriage equality in 2013.
‍
As an LGBT+ youth charity, we have celebrated every step of the way, adapting to the changing times whilst acknowledging that there is still so much more to do.
‍
We have seen inspiring resilience in all children and young people that have attended Allsorts over the years, and their experiences, thoughts, creativity and concerns have shaped the project whilst strengthening our resolve to provide safer and more inclusive spaces for LGBT+ and unsure children and young people across Sussex and beyond.
‍
The Parents/Carers Group, established in 2013, has highlighted the importance of family support for trans and gender-exploring children and young people in particular. The support we have seen from parents and carers has been deeply moving, and their journeys alongside their children and young people have been insightful and paramount in broadening Allsorts’ organisational understanding of the needs of LGBT+ and unsure children and young people.
‍
Our Training and Education services have expanded greatly since their launch in 2002. In delivering LGBT+ inclusion training and workshops to the wider community, Allsorts has developed strong and longstanding relationships with secondary schools in Brighton & Hove, and with schools and colleges further afield across Sussex.
‍
Furthermore, through sharing our experiences and expertise in our field, our impact has had national reach in the form of the Rainbow Flag Award quality assurance framework for schools and colleges, and our Trans Inclusion Schools Toolkit which has informed organisations countrywide of best guidance practices and policies for trans inclusion.
‍
In recent years, we have seen the growth of our youth groups and one-to-one service from Brighton & Hove, to Horsham, Chichester, Worthing and now Hastings. It is crucial that we can continue to expand into rural and harder to reach areas to ensure that LGBT+ and unsure children and young people feel listened to, supported and connected across the Southeast, and under the leadership of CEO Katie Vincent, Allsorts looks forward to the future and to working with generations of inspirational young people to come. 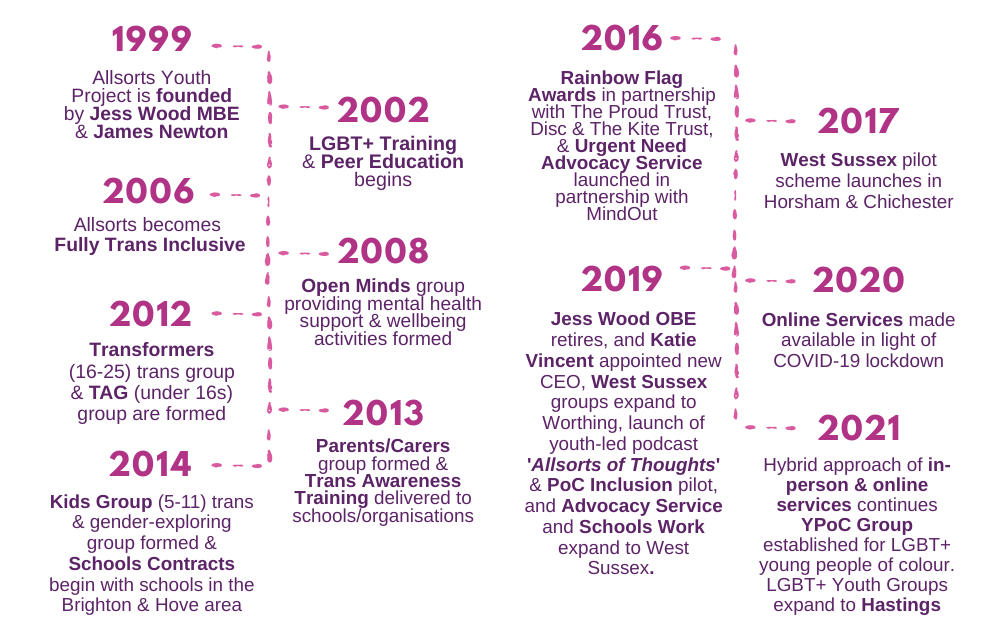