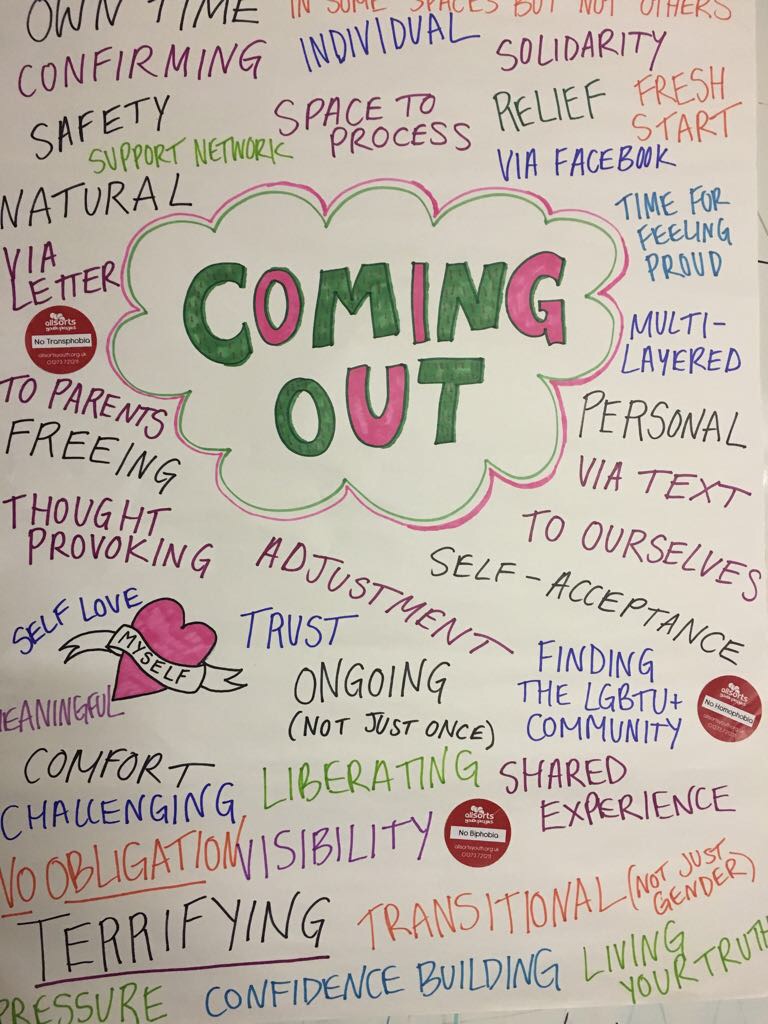 National Coming Out Day is an annual LGBTU awareness day founded in 1988 in the USA. To celebrate this day we've been discussing & working on  an online campaign to celebrate and share our Coming Out stories in order to promote visibility & awareness of LGBTU lives.

Coming out as bisexual was challenging as there was (and still is) lots of myths about bisexuality and lots of young people I went to school with thought I was actually just gay but didn’t want to tell anyone.

My parents were the same too. In the end I did come out as gay as I was in a same-gender relationship and it just felt easier. It took me to get in to my 20s, and after I came out as trans, before I felt able to reclaim my identity as a bisexual person and feel comfortable with that.

My experience has lead me to want to see change in the LGBT community and beyond with better positive representation and visibility for bisexual people!

My name is JP and I am a non-binary youth support worker at Allsorts. Having already come out about my sexuality in my early life, the thought of doing this for the second time was a daunting prospect. It was only recently that I decided to talk openly about my gender identity.

For a non-binary person whose gender expression reflects a particular gender stereotype, the “coming out” process can be a daily occurrence. In some way, this message is my own official public coming out to those reading it. My decision not to disclose my gender identity sooner was not because I was worried about what people would say, although this has crossed my mind, but because I didn’t know how best to describe the way I felt.

How could I come out to other people when I was unable to come out to myself? The English language is ever-evolving, and so is our personal understanding of identity and the ways we attempt to define gender. Growing up, I explored various terms and their definitions but felt none of these represented my personal feelings toward my own gender self.

I knew that my gender identity did not align with the two-way gender binary, but it hovered between the two. With the support of a small pool of people, (mostly colleagues and select friends/family), I came out as non-binary because this identity term resonated with me, and best defines how I feel right now. In an ideal world, the concept of coming out would not be necessary.

I was 16 when I came out as gay. I’d had a massive crush on one of my female school friends and I thought, “oh ok, this feels different, I’ve never felt like this before”, as feelings I’d had for boys weren’t quite the same as that. I told my friends first and their reaction was a pretty unanimous “yeah, we kinda knew…cool”, I got a few hugs and that was it! They were a really great.

When I got together with my first girlfriend soon after coming out to my friends, my parents worked out pretty quickly that I was gay - and luckily they were incredibly supportive - but it still took me a few years to look them in the eye and actually say the words “I’m gay” with confidence.

Despite being lucky enough to have supportive friends and family, growing up in a world that doesn’t reflect your experience, with insidious heteronormativity, where you feel different, was really impactful for me and my mental health suffered at times.

I have come out hundreds of times since then and continue to come out nearly every day. The way I choose to look means that I am always read as heterosexual until I tell people otherwise, which is a little frustrating - I would love to live in a world where people don’t make assumptions about sexual orientation based on appearance. I’ve had some reactions that aren’t very nice, and some reactions that are incredibly ignorant (‘Are you sure? You must be straight, you don’t look gay!”) but I have the confidence to put those people in their place now! I’m a strong, empowered, proud gay woman.

When I was 17 my parents asked me if I was gay. I had long hair in plaits, make up on my face and nail varnish on my fingers.  I looked like a girl and I was attracted to girls.  So I said no I am not gay.  I am a transvestite like Eddie Izzard.  My mum and dad respected Eddie Izzard and me so that was that.

When I was 18 I had my first kiss with a boy. I had a girlfriend and when I told her she asked me to never speak of it again so I promised not to. We bought a flat together and I proposed to her. 4 months before the wedding I came out as a gay man. It seemed to make sense at the time. I got a boyfriend. We broke up after 2 years.

I came out as a trans girl. Nobody really believed me so I cut my hair and found a girlfriend.  I came out as Bi, then gender queer. Then again as a trans woman.  I started transition.  Then I got a boyfriend and I thought I might be a straight girl. Then I met a woman and I realised that I’m a lesbian.  I came out AGAIN as a dyke.  I choose dyke to describe my identity.

Now I look like a girl and I have a girlfriend and it’s 20 years since my mum and dada asked if I was gay and I can honestly say yes.

I am a big gay transgender woman and it rules.

I’ve been out for a little over 11 years. There is an assumption that once you’re out, that’s it and it’s all done and dusted but I think what is forgotten is that any new interaction could result in a coming out of some sort.

I have now found a way of using language where I don’t have to label myself as an ‘other’ by saying ‘actually I’m gay’, but will say something about my partner and ensure I use ‘he’ somewhere in the sentence. I would consider myself pretty robust in the majority of situations or conversations that arise, but it still bothers me that people, men in particular, seem to be stunned into silence when they realise I’m not straight. This is all based on assumption and it seems difficult for people to compute that I am a gay man yet don’t fall into the stereotype of what the world assumes a gay man to be. This means I find myself coming out more often than not.

National Coming Out Day for me, is every day. I come out when I am travelling for work, I come out to children I work with, I come out to the taxi driver on the way to a school and come out again to kids within that school. There is the potential for me to come out every day… Sometimes more than once a day.

So… I came out for the first time 11 years ago but I imagine I will be coming out for many years more.